By James Thomas, Published in the Racing Post on 31st August 2017 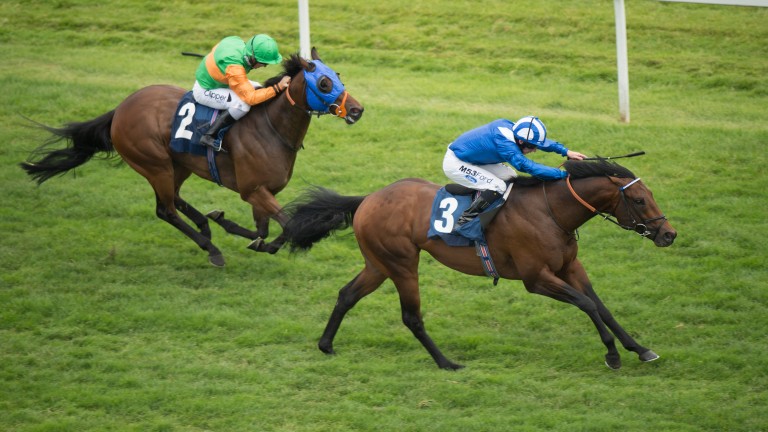 After three days of high-octane selling in Doncaster few people at the Goffs UK complex wore a broader grin than Mickley Stud's Richard Kent, who witnessed the first-crop progeny of his stallion Heeraat receive a warm reception from the buying bench.

During the two-day Premier Sale eight lots by the son of Dark Angel, five colts and three fillies, changed hands for an average of £54,250. While on Thursday, one of his sons topped the Silver Sale when going to Peter and Ross Doyle for £48,000. Those figures represent mightily impressive sums for foals conceived from a covering fee of just £4,000.

"We were expecting good things but it's still great to see it come to fruition," said Kent.

"When you're starting a stallion off it isn't easy. We've tried to cover as many suitable mares as we could. He wasn't a syndicated horse though, so they're not out of expensive mares. The dam of the colt who made £48,000 was bought very cheaply off the internet.

"But his horses all seem to be healthy individuals with great constitutions and good movement. We've tried to concentrate on getting people who breed good racehorses involved. I've been told that his progeny all have big, strong hearts, so hopefully that will stand them in good stead on the racecourse next year."

Kent was also quick to heap praise on the team at Shadwell, whose input proved invaluable when securing the Hackwood Stakes winner for the Mickley roster.

"Kate Whitehouse, assistant to Angus Gold [Shadwell racing manager], kept telling me about this beautiful horse they had, and that when he retired I should get him," he explained. "So we followed him through and approached Shadwell about purchasing him. Angus has been very good to us and given us a lot of help."

With plenty of sales ahead Kent is keeping his fingers crossed that Heeraat can maintain his early momentum, and nominated the colt from the family of Irish 1,000 Guineas runner-up Ardbrae Lady (Lot 311), consigned by Ballyphilip Stud, at the Goffs Orby Sale as a yearling well worth keeping an eye on.